Posted on June 23, 2013 by jbhousephotography

When we as Americans think of Gettysburg we generally think of the civil war battle that surrounded the village for four days in July of 1863.  Yet it is also a living breathing village, where families have dwelt for generations, surrounded by history, yet living day to day like people in any small town.  No different from say, Corning, New York or Prescott Arizona in size.  It is the county seat of Adams County, as it was in 1863; it has a small college, the county courthouse, restaurants for locals and destinations for tourists.  While we prepare to remember the 150th anniversary of the Battle of Gettysburg let’s take a few moments to look at a few scenes around town.

Starting with the “Adams County Courthouse” we can see the influence of the twentieth and twenty first centuries on Gettysburg quite clearly.  The numerous power lines strung over head will look familiar to anyone who’s spent time in Central Pennsylvania, which seems to have a love of hung power lines more than other parts of the North East.  On the wall of the courthouse is the Adams County monument to the World War.  While states were building massive monuments around the battlefield honoring the fallen soldiers from half a century before, the county placed a modest plaque on the court house in 1920 to remember the fifty three men from Adams County who died “to make the world safe for democracy”. 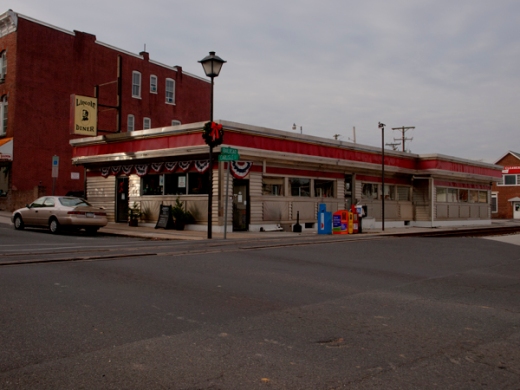 Like so many things in Gettysburg, the local diner is named for Abraham Lincoln (there is also a buffet named for General Pickett).  At least the day I was there the Lincoln Diner was serving mostly locals.  Grandmothers with grandsons, people in town for a shopping trip, people coming off work and the like.  The food was good and reasonably priced, and the atmosphere was friendly.  They had wifi which was handy, something that would have fascinated Lincoln, and also public restrooms which were hard to find at 9 am on a Saturday two weeks before Christmas.

Any community that is involved in major tourism (and few are more than Gettysburg) needs a local visitor center.  In Gettysburg’s case it is in the historic train station.  The workers on site were incredibly helpful, and the site itself celebrates Lincoln’s connection with the railroad station where he arrived to give the Gettysburg Address.  It had a very nice display on the railroad itself, as well as an interesting display on the history of the village following the Civil War.

All these pieces can be found and bought at my website.  http://joshua-house.artistwebsites.com/art/all/gettysburg/all

Be sure to come back next week for some amazing panoramic photos of Pickett’s Charge and one of the Eisenhower Farm.